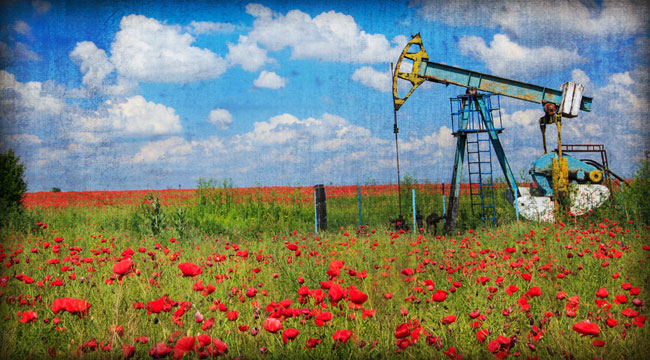 Oil has always been at the center of the economy and the markets. Little is made, built, transported or consumed without it.

Of course, oil is also a finite resource… which is why you’ve heard so much concern about how much we use versus how much is available. It’s often referred to as “Peak Oil” — the argument that world oil production had topped out.

But just when it seemed all of us would have to adapt to a world with less oil, the people and industries that have devoted their lives to black gold proved they are also some of the most resilient and innovative at finding more — even when conventional wisdom told them that it was all gone.

In fact, the oil industry has always been this way.

Back in the 1800s, early oil producers would simply soak up crude that was seeping around streams and rivers. The United States was literally awash with oil.

But with rising demand from transportation and energy production, as well as chemical and other industries, the easy oil disappeared quickly. So the oil guys came up with the means of drilling and pumping oil to the surface. The innovation gave U.S. and global oil supplies a huge surge.

When drilling straight into the ground stopped being effective, the drillers innovated again. Using everything from offshore rigs to more recent adaptations, like running drill bits not just in a vertical fashion — they’ve been able to extract more oil from older or more challenging fields.

Again and again, as the world demands more oil, the industry comes up with new ways of getting it out of the ground and into the market. And in every step along the way, those investing in each new wave have made fortunes.

Of course, right now one of the most celebrated oil techniques is called fracking.

Fracking is used in places where oil is trapped in rock formations and can’t be extracted in traditional ways. High-pressure water and chemicals break up rock formations, releasing the oil and forcing it to the surface. So pockets of land once deemed devoid of oil now seem flush with it.

The fracking revolution has transformed the American landscape. For instance, there are thousands of newly minted millionaires in North Dakota. And investors who got onboard with the companies at the center of fracking — from the equipment manufacturers to the transporters and distributers, not to mention the producers themselves — have made returns that are multiples of the S&P 500. 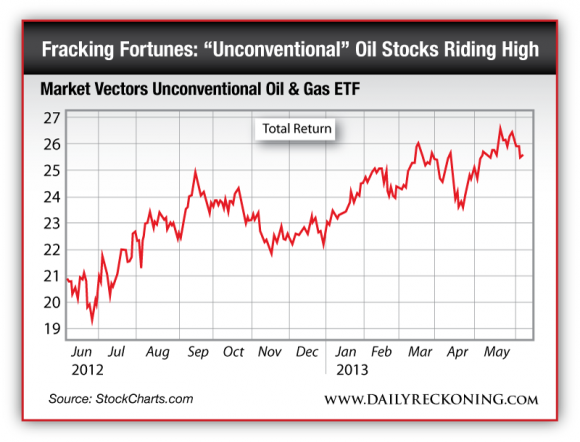 The interesting thing is that fracking isn’t new. The process has actually been around since the 1940s. It just hasn’t been cost-efficient until recently, when the ever more innovative oil industry worked out the kinks.

But as I type, the industry is refocusing on another older technology that could lead to a new wave of oil production. In fact, it could lead to more oil output than fracking… which means you’ll want to get in before the rest of the world catches on.

It’s called enhanced oil recovery (EOR) — a process of pumping carbon dioxide (CO2) into existing oil wells. The CO2 acts as a sort of lubricant for crude oil, allowing it to slip up and out of rock formations, then to be pumped fully to the surface.

It doesn’t necessarily replace fracking — but like past transformation of oil drilling, it’s just another big step in getting more of it out of the ground. It essentially releases oil that had been inaccessible in existing wells, extending the wells’ productivity.

This technology and process was developed out of necessity during the Organization of Petroleum Exporting Countries (OPEC) oil embargo in 1973, when two oil companies — Amerada Hess and Occidental Petroleum — were looking for ways to get oil out of U.S. fields that were no longer productive.

Technically, the process worked. But when the crude came up, it was heavily mixed with water, making it prohibitive to use in the existing production and refining processes.

Today, however, oil companies now have new and increasingly common technology known as de-watering. This not only makes the waterlogged oil from enhanced recovery workable, but also creates clean water that can be used for agricultural use or even human consumption. (That’s in stark contrast to fracking, where critics question its water use and potential pollution!)

CO2 pumping is going to be even bigger than fracking when it comes to getting more oil out of the ground. Up until now, traditional drilling and fracking has missed as much as 75% of the oil in a given well.

So companies that adopt EOR will get more oil out of places it’s already been found — potentially many times what’s already being produced.

This process is now being quickly adopted in the Permian Basin fields in Texas and New Mexico — but should be expanding nationwide in the coming months and years. EOR is ready to produce an additional 4 million barrels per day (MBPD) in the United States, and many more in the years to come. (For comparison, fracking is responsible for just 3 million of the 7 million barrels produced in the United States today.)

This will add a substantial amount of overall proven crude oil reserves in the United States, from 222 billion barrels to more than 323 billion barrels.

P.S. The Environmental Protection Agency is preparing to phase in CO2 limits in coming years. So the use of CO2 in the petrol patch will only become more valuable. Oil companies can earn credits that can be sold, and they might well enable U.S. companies to profitably reduce their emissions.