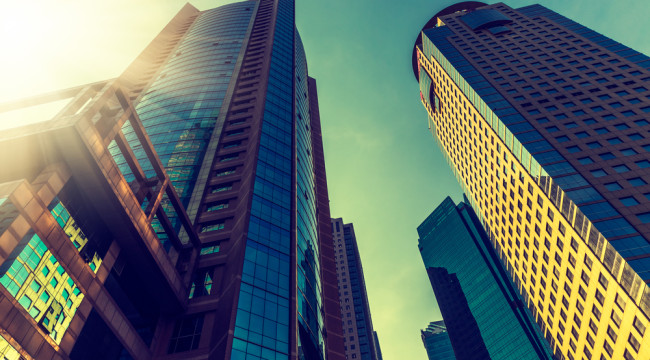 “There is nothing inherently dangerous about a real estate cycle,” ratings agency Fitch explained in its latest report. “It only becomes dangerous when market participants forget there is one.”

Commercial property prices in the US rose 1.1% in August from July, and 10.2% from a year ago, according to the Green Street Commercial Property Price Index (CPPI).

They have soared 95% from May 2009 and are now 19.3% higher than they’d been in September 2007, the peak of the crazy commercial property bubble that collapsed spectacularly during the Financial Crisis.

“While commercial real estate values have continued to move higher, the pace of appreciation has slowed compared to earlier in the year,” Green Street Advisors explained to soothe our nerves. The report went on:

Cap rates appear to have leveled out over the past few months. And given the current state of capital markets it doesn’t look like they’ll move any lower. Real estate is looking increasingly expensive versus corporate bond yields, which have been on the move higher. Additionally, pricing in the market for publicly traded REIT stocks suggests investors there share the view that property values are stretched.

And this is what the Green Street Commercial Property Price Index looks like. I mean, it doesn’t look like a bubble or anything: 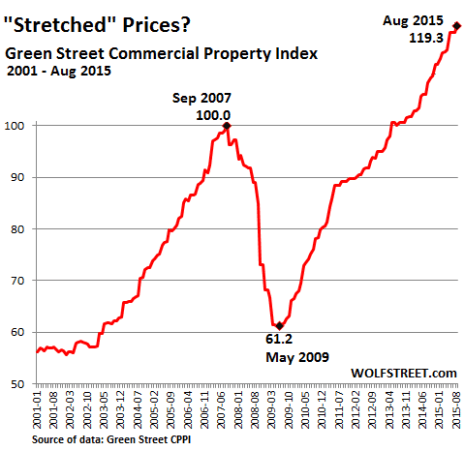 The chart shows how much smaller the prior bubble was than today’s monster. And it wasn’t a bubble either until after it had imploded, collapsing to 2004 levels and taking down CMBS bonds with it. Then the Fed reflated the whole thing to its current glorious state.

CMBS bonds made it possible then, before they blew up. And they’re making it possible now. But some folks have already gotten cold feet, including GE.

In April, GE became famous as a market timer: It’s a “strong seller’s market for financial assets,” it said and began to unload the bulk of the assets held by GE Capital, including $26.5 billion worth of financial assets tied to commercial properties.

And now Fitch Ratings is warning – softly, in order to avoid fraying the nerves of the industry that feeds it – about the commercial property cycle. Things have been awesome for the past seven years. But real estate goes in cycles. And cycles are cycles, not straight lines:

Weakening loan characteristics, declining underwriting quality, and concerns about originator, banker, and rating agency competition are not new items on investors’ minds. And there are reasons to believe that this time around will be different.

I added the emphasis because the phrase, “this time around will be different,” used without even a scintilla of cynicism, briefly took my breath away, after all the US economy has been through based on this time-honored hope. And the report goes on to explain what’s different this time:

For instance, pro forma income is greatly discounted or ignored altogether and perhaps most importantly, credit enhancement levels are substantially higher. But market participants can ill afford to forget how quickly performance can change.

And unnerving comparisons to the crazy pre-Financial Crisis peak keep cropping up in the report:

But given the two reasons why “it” will be different this time – pro-forma cash-flow increases are ignored, and credit enhancements are higher – Fitch concludes that “it’s unlikely that the next twelve months will bring the same level of misery that followed the September 2008 peak.”

Comforting words. Whatever happens over the next 12 months in commercial real estate, it is “unlikely” going to be an implosion.

But it is important to remember that economic cycles are, by definition, cyclical. The current upturn commercial real estate has been enjoying since 2009 will eventually come to pass and the CMBS market can ill afford to forget the tough lessons learned in previous cycles.

Fitch laments the “potential for short memories in the commercial real estate market,” and the fact that some CMBS originators “haven’t been around long enough to experience a full cycle much less multiple cycles.” Thus they might lack “the perspective and tools necessary to conduct thorough analysis and respond appropriately to unanticipated stress.”

This sort of “stress” is always “unanticipated.” A bubble, particularly a real estate bubble, doesn’t exist until after it implodes. No one – especially not the geniuses at the Fed – can possibly ever see it while it’s ballooning before their very eyes, as for example in the chart above. And when it implodes, they all feign surprise and assure us once again that no one could have possibly seen it coming.

But bond investors are getting nervous. Read… The US Bond Market is far Larger than the Stock Market: If Even Part of it Blows, it’ll Dig a Magnificent Crater.