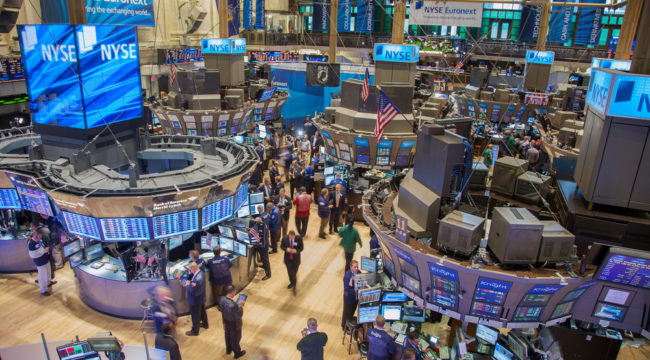 Anatomy of a Crash

“The four most dangerous words in investing: ‘This time it’s different.'”

It was just another down day on Wall Street…

The selling was vigorous — yet orderly — for much of the day.

“What was frightening was the speed at which the market tanked,” attests Walter Hellwig, senior vice president at BB&T Wealth Management.

At the perspiring extreme, the Dow was down 1,597 points on the day.

Then it was over… and order was restored.

It was nonetheless the largest single-day point drop in Dow history.

But what caused the 900-point terror?

At once we spot a clue…

When did we find VIX at its panicked extreme?

You recall what happened just after 3 o’clock… don’t you?

“Algorithmic trading can also be triggered by ‘correlation’ trades,” says a BBC story citing Piers Curran, head of trading at Amplify Trading, “when movement in one market will trigger a trade in a different market.”

Some of those “correlation” trades link VIX to the Dow Jones.

And once VIX spiked around 3 o’clock, the machines got it in their heads to sell…

The VIX was very elevated last week, and doubled on Monday, and because there is often an inverse correlation between the VIX and the Dow Jones index, the machine traders sold U.S. equities.

But once the spiking VIX triggered their algorithms… they unleashed the hounds.

The selling fed upon itself until the Dow heaved up 900 points in 15 minutes.

Particular suspicion landed on trading programs tied to volatility, mathematical measures of which exploded as the day progressed… While it’s impossible to say for sure what was at work when the Dow Jones industrial average fell as much as 1,597 points, the worst part of the downdraft felt to many like the machines run amok. For 15 harrowing minutes just after 3 p.m. in New York a deluge of sell orders came so fast that it seemed like nothing breathing could’ve been responsible.

“The drop in the morning was caused by humans, but the free fall in the afternoon was caused by the machines,” affirms the aforesaid Walter Hellwig.

Let us now bring to our investigation an accomplice, a partner in crime…

As we reported yesterday, many analysts believe stocks could sell off massively when the 10-year Treasury yield reaches 3%.

Yesterday afternoon, yields on the 10-year Treasury were fast approaching 2.9% — one false step from 3%.

Word rapidly spread to the computers, and their silicon imaginations ran wild…

They multiplied the news, squared it… then squared it again.

Everyone looks for a reason for why the fall happened. One of them was that bond yields rose up toward the magic number of 3%… There seems to have been a trigger at 2.9% for automatic trading to sell and once that trigger was pulled the markets went into free fall.

In confirmation of the machine theory, Stevenson adds, “The explosive speed of the fall… that is done by machines.”

Thus, we believe we have our culprit:

We’ve previously covered this type of “passive investing,” in which computer algorithms run the show.

Passive, because it swims with the tide.

All is glory while it rises.

But when the tide recedes… it recedes.

Jim Rickards has even labeled them “the new financial weapons of mass destruction.”

In a bull market, the effect is to amplify the upside as indexers pile into hot stocks like Google and Apple. But a small sell-off can turn into a stampede as passive investors head for the exits all at once without regard to the fundamentals.

And after a jittered start today, stocks rounded back into form.

The S&P and the Nasdaq also recaptured their vigor.

What tomorrow holds, or the day after… we cannot say.

But as euphoria gave way to horror this week, we are once again reminded that trees do not grow to the sky.

And that “this time” really isn’t different after all…