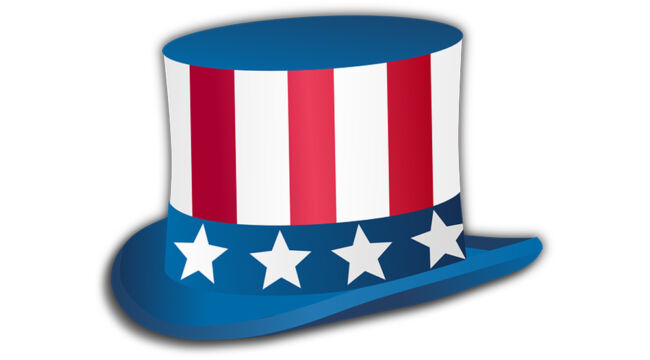 America’s “Unipolar” Moment Is Over

First, a necessary formality: As a retired U.S. Navy officer, I’m obliged to tell you that what follows are personal opinions. I do not speak for the Navy, Department of Defense or U.S. government. Having said that, let’s roll…

That is, American military hegemony is now over. Russia has reasserted its role as a global great power. Russia saw a critical threat embodied in the idea of Ukraine in NATO, and the country acted. Diplomacy failed, and Russia’s President Putin and his generals rolled the tanks.

Wise or unwise? Time will tell. It depends on who writes the history books.

For now, though, the world has changed. And we have a new war, and not a little one either.

This Ukraine expedition is a major, continental-style European war, underway adjacent to several NATO-aligned nations, all happening in a Texas-sized country with a population of about 44 million.

You Can’t Trust “the News”

Russia is employing a full range of modern combat power. This involves hundreds of thousands of troops; tens of thousands of pieces of mechanized equipment; many thousands of aircraft; incalculable levels of ammunition and all manner of systems in the arenas of electronics, cyber and space.

If you have trouble processing what’s happening, it’s understandable. Whether you’re plain-old Joe or Jane Citizen, or President Biden and his senior staff, this new version of Russia and its application of combat power is unfamiliar, if not unnerving.

Meanwhile, and with this in mind, it’s critical to understand that essentially all “war news” and imagery you see comes at you in a highly filtered manner. Most stories in Western news originate from the Ukraine side and are processed through various U.S./NATO/European government and corporate-level outlets.

That is, you are NOT seeing Russian accounts of either the lead-up to or conduct of military operations.

Most initial reports in war are wrong. They tend to be random and based merely on where someone happened to be at a certain time. Basically, the “front-line news” is a collection of sequential anecdotes that cumulatively fail to tell the broad story.

OK, so what is this “broad story” of which I speak? Well, let’s look at a map from one leading outlet that typically sets the narrative in the U.S. and West in general, The New York Times.

“Russian Gains in Ukraine,” per The New York Times: 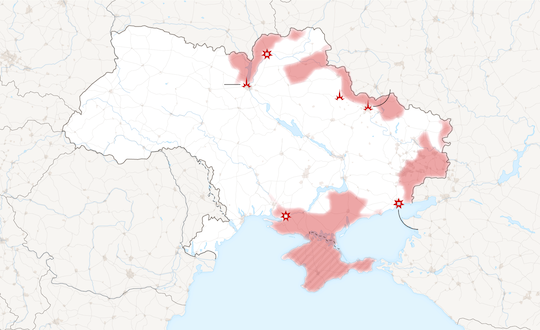 Here, the Times shows Russian incursions (in red) into Ukraine. To casual observers, unschooled in concepts of military operations, it appears that Russian troops have not moved far, just sporadic advances along borderlands.

Meanwhile, other Western news accounts (New York Times and many others) describe how Russian columns are being held up by stiff resistance, or for lack of fuel or supplies, or by effective Ukrainian counterattacks.

Well, no doubt the Russians have taken losses, even serious losses in more than a few locales and engagements. There’s online video of entire supply columns torn to shreds, and wrecked tanks, crashed helicopters and jets and much more.

Plus, accounts of Russian units stalled for lack of fuel, which indicates problems with logistics if not Ukrainian sabotage in rear areas. But anecdotes don’t explain the operational story. Here’s a different map from a Ukrainian source that does a better job to display broad, operational information. 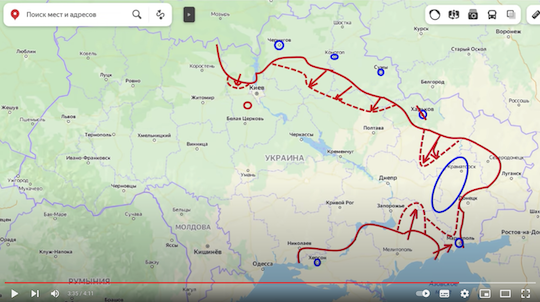 Are the Russians Really Losing?

The guy who prepared this map is not a military expert, but his rough drawings are good enough to explain quite a bit. The map reveals Russia’s concept of operation far differently, as compared with The New York Times’ map.

In essence, instead of a hit-or-miss scatter of Russian incursions along the borders, this map clarifies the operational plan: broad movements into Ukraine along wide fronts north, east and south.

From the north, Russian combat power moved south toward Kyiv, displayed on the left part of the map. Evidently the Russian army is setting up for an encirclement and eventual surrender or capture. On that, we’ll have to wait and see.

Note that Russian forces have bypassed most large cities (blue circles). Russian forces just surround them and will either accept surrender or capture them later on – shades of Grozny, if you followed that operation in the late 1990s.

Over east, the operational plan is clear. Russian forces have moved south to positions behind Ukrainian forces that have long been arrayed to confront Luhansk and Donetsk. And from the south Russians have moved north from Crimea and via coastal landings on the north side of the Sea of Azov. (Note that the coastal city of Mariupol is surrounded as well.)

Here’s the point: Russian forces have effectively encircled the bulk of Ukraine’s army, which is positioned in those eastern regions.

Now, the question is whether or not Ukrainian forces (blue dashes) can exit from this fast-closing Russian pincer movement. And to be militarily frank it may already be too late. There’s a massive Russian encirclement in progress.

Even if Russian forces don’t totally close the gap, that north-south stretch west of Ukrainian forces is what we call a “kill box.” Russian artillery and missiles can easily blanket the entire space with firepower.

Looking ahead just a few days, Ukraine’s military power in the east will be totally surrounded and trapped, like in a giant version of Stalingrad. Ukrainian commanders and troops will have the bitter choice to fight and be crushed, or to offer an orderly surrender.

Now, let’s reconsider those feel-good videos of Ukraine citizens mixing Molotov cocktails and practicing with AK-47s back in Kyiv. It doesn’t matter. For them, it’s over because Russia’s plan is to win the war in the east by wrecking Ukraine military power in the field.

We can speculate over whether Russia will occupy the entire eastern region of Ukraine, for example all lands east of the Dnieper River. That remains to be seen. Does Russia need the farmland? Or would it make a good buffer zone for Russia proper? Time will tell.

For now though, let’s return to larger, geostrategic issues.

It Takes Two to Tango

Again, it’s critical to understand that America’s unipolar moment has just ended. Russia is now able and willing to throw its military weight around, and its conventional forces are immensely powerful despite what you might hear from mainstream media. (They’re all drunk, their equipment stinks, blah, blah. NO!)

From the outset, Russia wanted U.S./European guarantees that Ukraine would never become part of NATO, and assurances not to place powerful weapons near Russian borders. It was a mirror image of the U.S. and Cuban Missile Crisis of 1963. But in a feat of truly idiotic diplomacy, the U.S. and NATO turned Russia down and now we have a war.

In response to the war, the U.S./West have imposed sanctions on Russia, including restrictions on access to SWIFT banking channels. Well, we’ll see how it unfolds because Russia and China have long anticipated this and they have a backdoor system to clear accounts, a Plan B so to speak.

Of course, it’s possible that sanctions will backfire against the West. Russia can curtail airline overflight rights, and thus disrupt travel and commerce with Asia and elsewhere. And Russia can curtail oil and gas exports to the West, driving up energy prices. Or curtail exports of critical materials like aerospace-grade titanium, or even the elemental gas neon which is critical for manufacturing silicon chips.

And what happens if (when?) Russia – and perhaps China – team up to create a new, gold-backed global currency that undercuts dollar hegemony?

Jim Rickards has discussed this for well over a decade, and it’s definitely in the cards. So, like the fate of Kyiv and much else, we’ll just have to wait and see.

Russia has planned this war for a long time, and the maps reveal deep operational thinking at work. All this while America’s 30-year era of unipolarity is over.