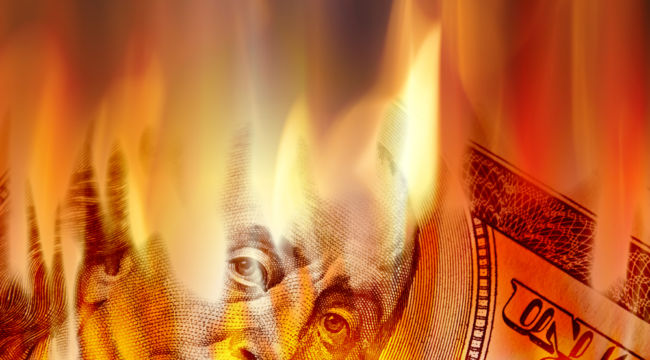 A Tour of the Future

Sharp, bracing winds have scattered the fog. The horizon is now visible… and the future drifts into focus.

Yes, we have the future in sight.

Today we report the way ahead.

We begin where we stand — upon creaking and groaning floorboards…

Recessionary Warnings in all Directions

Manufacturing surveys indicate global manufacturing contracted in May… for an unprecedented 13th-consecutive month.

The Cass Freight Index — a broad measure of domestic shipping activity and a plausible thermometer of economic health — has dropped 3.2% since last April.

Meantime, the bond market flashes warnings of a lean season ahead.

Ten-year Treasury yields have dropped to their lowest levels in two years, to 2.12%.

Thus we stand upon our precarious perch, wary of the shifting, sandy foundations beneath us.

But it is the future we have in mind today…

Morgan Stanley: 60% Chance of Recession Within One Year

The professional optimists of the Federal Reserve’s Atlanta branch office expect Q2 GDP to ring in at a slender 1.3%.

JP Morgan also — incidentally — places the odds of recession in the second half of this year at 40%.

It placed those same odds at 25% one month prior.

It further gives a 60% likelihood of recession within the next year — its highest percentage since the financial crisis.

Of course, the Federal Reserve looms large in our vision…

The current rate hike cycle is ended. The Federal Reserve will next slash interest rates.

As Craig Hemke of Sprott Money News notes, two options rise before the august ladies and gentlemen of the committee.

1. Admit defeat and immediately cut the fed funds rate by up to 50 basis points.

2. Stall. And if they do this, bonds will rally even higher as the bond market will anticipate an even more dramatic global economic collapse.

The market votes heavily for Option 1.

Federal funds futures currently give nearly 70% odds of at least one rate cut by July.

Some crystal gazers even hazard three rate cuts by this year’s end alone.

The Trigger for Recession

But as we have noted repeatedly… the next rate cut is a phony cure.

It is fool’s gold, a snare, a desert mirage.

The past three recessions ensued within 90 days of the first rate cut that ended a hiking cycle.

While many analysts will caution that it is the Fed’s rate hikes that ultimately catalyze the next recession… it may come as a surprise to many that the last three recessions all took place [within] three months of the first rate cut after a hiking cycle!

We have every reason to expect the trend continues uninterrupted.

We further allow the possibility that the economy has already slipped into recession.

Recessions are often only identified several months after they commence — or longer.

Early next year, the bean counters may well point to Q2 2019.

Regardless, the recessionary straws are swaying in the stiffening breeze. Even Jerome Powell spots them.

So he will be on hand with more potent pyrotechnics.

From comments this week:

It’s time to rethink long-run strategies… Perhaps it is time to retire the term “unconventional” when referring to tools that were used in the crisis. We know that tools like these are likely to be needed in some form in the future… The next time policy rates hit the lower bound — and there will be a next time — it will not be a surprise.

These and more tricks he doubtless has in mind.

And did you catch this bit?

“Perhaps it is time to retire the term “unconventional” when referring to tools that were used in the crisis.”

Central banks have inflicted these “unconventional” tools upon the world’s citizens for 10 years — to varying degrees.

But if these gaudy and flashy devices met their advertising… why is the economy plunging into recession at all?

It is true, they have lit up the stock exchanges. But they fell as duds upon Main Street.

Why should they dazzle the crowd now?

They worked one primary effect:

To drill the world trillions of dollars deeper into debt.

Global debt has doubled post-financial crisis… as has the United States national debt.

Yet we return to the future…

Prepare for the Cannons of Fiscal “Stimulus”

We observe that the Federal Reserve’s punchless old fireworks have failed.

That is when the national authorities will haul out the cannons…

They will load them full of Modern Monetary Theory (MMT) — or “QE for the people.”

Rolling barrages of fiscal “stimulus” they will send raining down onto Main Street.

If a Democratic commander in chief is barking the orders at the time, he may load a Green New Deal into the breeches.

All these and more it will promise — and save the world into the bargain.

The False Miracle of Debt

Like most crank ideas, these fevered schemes will fail in grand and spectacular style.

The false miracle of debt is their common delusion.

All debt-based consumption steals from the future to gratify the present. It is tomorrow’s consumption pulled forward.

It depletes the capital stock… and leaves the future empty.

It signs a perpetual check against an overdrawn future.

Mark Jeftovic of the Guerrilla Capitalism blog on MMT, which can extend to a Green New Deal:

Think of an MMT crisis as an economic black hole sucking all value from further and further future generations into a gravitational vortex of the present moment, where all value collapses in on itself and disappears forever.

Thus we conclude our tour of the horizon.

Mercifully, we can see no farther…