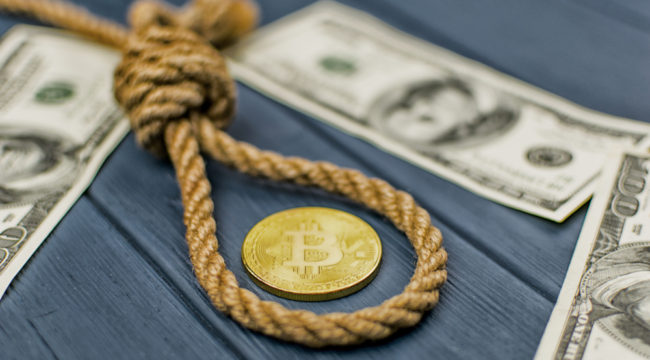 The SEC Lowers the Boom on Bitcoin

I’ve warned repeatedly that government regulators would be putting the squeeze on bitcoin and other cryptocurrencies.

Well, the noose just got tighter.

The Securities and Exchange Commission (SEC) announced yesterday that bitcoin and many other cryptocurrencies meet the government’s definition of a security and are therefore subject to regulation. Importantly, crypto exchanges must register with the SEC.

Here’s what the SEC said:

If a platform offers trading of digital assets that are securities and operates as an “exchange,” as defined by the federal securities laws, then the platform must register with the SEC…

The SEC staff has concerns that many online trading platforms appear to investors as SEC-registered and regulated marketplaces when they are not.

Yesterday’s announcement follows action the SEC took late last month, when it issued a number of subpoenas and information requests to companies dealing in the crypto markets.

Christian Catalini, a professor at MIT, estimates that $270–317 million of the money raised by coin offerings has “likely gone to fraud or scams.”

“We’re seeing the tip of the iceberg,” said Dan Gallagher, a former SEC commissioner, adding, “there is going to be a ton of enforcement activity.”

I agree, and I’ve been saying that for months. But it’s not just U.S. regulators that have made the news.

Japan’s crackdown comes a month after the Tokyo-based exchange Coincheck lost about $500 million in a massive cybertheft.

The bottom line is the bitcoin fans who mock the government and play “catch me if you can” are finding out the hard way that the government has the resources to track them to the ends of the Earth.

Besides the SEC, I explained last week how the IRS is also cracking down on bitcoin. It’s already demanding all records of cryptocurrency transactions from cryptocurrency exchanges including names, addresses, Social Security numbers and bank account information about their clients.

One man got a very nasty surprise when he received an IRS Form 1099 from Coinbase, a major U.S.-based cryptocurrency exchange (not to be confused with Coincheck).

It informed him that he owed $2.4 million in taxes, despite his estimate that he only put $8,000 into cryptos. He decided to sit tight in the belief that he does not owe the taxes.

The IRS will take its copy of the 1099 (the IRS also receives a copy) from the exchange and assert that this man does owe the taxes. The IRS puts the burden of proof on the taxpayer to show they don’t.

Courts have backed up the IRS on this burden-of-proof approach. Just ask Al Capone, the notorious gangster who went to Alcatraz not for extortion and murder but for not paying his taxes! This guy will find this out the hard way how the IRS plays hardball, as will millions of other crypto customers.

Coupled with the latest SEC crackdown, the noose is tightening on bitcoin.