They’re Coming for Your Guns – Here’s How to Beat Them to the Punch!

Get “Guns,” “Ammo,” and More… All for Free or for Pennies on the Dollar

Few people remember, but the White House warned this day would come…

“There are executive orders, executive action that can be taken.”[JG4]

Well, now what is perhaps the biggest executive overreach of the past eight years is pending.

In short, the president wants to ban people from talking about guns on the Internet. Yes, TALKING (right to free speech) about GUNS (right to bear arms) may soon be ILLEGAL.

This executive order “serves to impose a chilling effect on the discourse of free people,” adding the obvious: It should not “be acceptable in a country that was conceived in Liberty.”[JG5]

To stick it to the man, a group of more than 30 researchers has come together to reveal an easy, fun way to get “guns,” “ammo” and other key items that nobody should live without… all for FREE or for pennies on the dollar.

Again… this weird trick will show you not just how to get “guns” and “ammo”… but how to get them FREE.

RELATED: New (free) book that reveals how anybody in America can prepare for any crisis scenario may soon be banned by President Obama’s executive order (#13563).

You may be wondering…

Well, the history of this unconstitutional executive order begins about three years ago…

As you may know, 3-D printing is a bleeding-edge innovation that can take any computer-aided design (CAD file) and “print” the physical object with different material.

Why did Mr. Wilson choose the Liberator pistol? It was a symbolic statement of the times.

Flash back to World War II…

The original Liberator pistol was the weapon of choice, that was parachuted by Allied troops down to citizens as an easy means to defend themselves against the Nazis.

The idea was that resistance fighters and civilians (who were stripped of their arms) could use these pistols to shoot an enemy soldier and “liberate” heavier weapons.

Both tactically and psychologically, the Liberator pistol was a major addition in the fight against the Axis powers.

It sent the Axis into a frenzy. How could they control the population when weapons were literally falling from the sky into the hands of the oppressed?

This is a picture of the “old” Liberator pistol (now worth upward of $5,000 on the market): 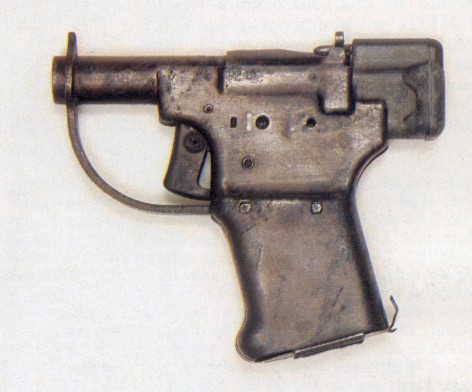 The “new” 3-D-printed Liberator pistol is one of many “guns” that can now be 3-D printed for just a few dollars at the most (which is only one “manufacturing hack” detailed here).

Flash back to today…

What started as a young law student’s bold statement, spiraled into a firestorm of controversy in the ongoing gun control war in America.

But the order extended way beyond its original intent. This new law applies to ANY guns.

In short, a pending update to ITAR (International Traffic in Arms Regulations) would make it so that, emailing somebody details or descriptions of a gun could be considered the same as sending them the real thing.

We’re not alone in sounding the alarm…

As the National Rifle Association observes:

“This latest regulatory assault, published in the June 3 issue of theFederal Register, is as much an affront to the First Amendment as it is to the Second…

“Gunsmiths, manufacturers, reloaders, and do-it-yourselfers could all find themselves muzzled under the rule and unable to distribute or obtain the information they rely on to conduct these activities.”

And as The National Review says:

“Those lads over at AR15.com discussing innovative rifle-hand guards in detail? Sorry chaps. The gentlemen at the National Gun Forum sharing gunsmithing tips and uploading manuals? Serial violators. 3-D-printing enthusiasts building themselves a new trigger for a recently designed shotgun? Criminals who didn’t request the King’s seal of approval.”

What can Americans do to fight this executive overreach?

Well, a group of 30 researchers is now willing to show you in detail the lowest-barrier, lowest-cost and most fun way to get what nobody can afford to live without…

All for FREE or for pennies on the dollar.

All you need to know is the one weird trick that you can use (many are using it right now) to rake in thousands of dollars’ worth of free stuff to keep you and your family safe.