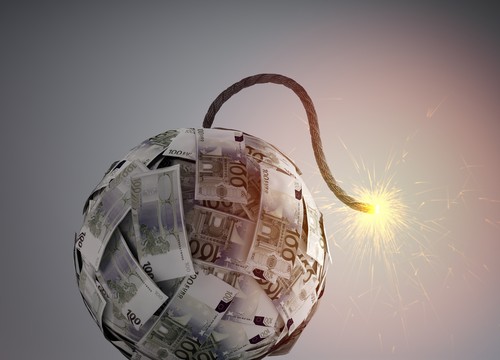 The Rule of the Downside

Energy is a good thing. But it is as obedient to the law of Declining Marginal Utility as everything else. The point is obvious, but I’ll prove it anyway. The real question on the table in this section is this: does it also obey the Rule of The Downside? Do you ever reach the point where further inputs of energy are actually negative…or even disastrous? Is there such a thing as too much energy?

In anticipation of the discussion, here are four observations:

1. Energy cannot be divorced from how it is used
2. The more energy resources come under government control, the more unproductive the system becomes
3. Government is subject to the Rule of the Downside too
4. The debt-drenched economies of today’s developed countries are already on the Downside

After 1943, Germany’s investment of more energy in the war effort was not only a waste — it was almost pure downside. Of Germany’s 5.5 million war deaths, most came after the war was effectively lost. The payoff from every ounce of strength, resources and energy devoted to the Wehrmacht after the battles of Stalingrad, North Africa, and the defection of its Italian ally, was needless death and destruction — leaving Germans poorer and fewer than they had been before.

But what about energy itself? Typically, it is the lack of energy, not the surplus of it, that is blamed for disasters. Some military historians, for example, claim that it was a lack of energy that crippled and distorted the German war effort from the very beginning. Instead of committing all his forces to the assault on Moscow, Hitler was forced to divert a large part of his army to the South, where his armies would seize and protect oil supplies in the Ukraine. Japanese military historians also tend to give “too little” as an explanation for their failures. At the Battle of Midway, for example, their ships literally ran out of fuel. After the battle, the Japanese were doomed. Their energy came from Indonesia. Without control of the Pacific they could not protect their supply lines.

It is also typical for archeologists and historians to blame the collapse of ancient civilizations on too little, rather than too much. The Easter Island civilization, for example, is thought to have perished because the natives ran out of trees. They used the wood for energy. When it was gone, they were out of luck. The trees are also credited with helping to keep the environment in good working order. This analysis has been leveled at Ancient Greek civilization too. The Greeks used up the wood and brought in goats, which ate the young saplings. After a few hundred years, the Greek islands were barren.

The abundance or shortage of energy, in itself, is meaningless. The rich deposits of uranium under their feet did the ancient Athabascan tribes of Canada no more good than the huge lakes of oil under the feet of Arab Bedouins. It is not so much the availability of energy that counts, but what you can do with it.

In the case of the Classic Maya, the civilization seems to have risen and fallen along with the rainfall. Scientists studied stalagmites from a cave in Belize and were able to track rainfall on an annual basis 1500 years ago. Comparing the rainfall record to the traces left by the civilization they found that building increased in the wetter periods and decreased when the climate turned dryer. Between 1020 and 1110 a severe drought hit southern Belize, finishing off what remained of the Classic Maya in the region. Here too, on the surface, you would say that ‘too little’ water marked the decline. But you could turn that around; the wetter years were perhaps ‘too wet,’ since they encouraged growth that couldn’t be sustained in the inevitable dry years.

Jeffrey Sachs, director of the Earth Institute at Columbia, would argue that using too much energy causes growth, which leads to an environmental disaster…which becomes a disaster for the civilization. Many people believe the world already uses too much fossil fuel, causing the heavens to fill up with noxious ‘greenhouse gases’ and the polar ice caps to melt. They think the downside of all this energy use will begin soon, or maybe it already has. For the moment, however, ‘global warming’ or ‘global climate change’ is just an hypothesis which seems a lot more alarming in the summer time than in the winter. For all we know, the effect of human activity on the world’s climate will be an improvement.

In a broad sense, you could say that all civilizations collapse because they “run out of energy.” Not necessarily oil, wood or coal. Civilizations — like families, businesses, and clubs — depend on the energy of their constituent members. If those members are expansive, innovative and aggressive in their use of the available fuel sources, the organization will thrive. If not, it will decay. But the more aggressive they are in using their energy…the faster it may give out. “More” turns into “too much”…based on the circumstances…and declining marginal utility gives way to the downside.

Where is the exception? Not in the history books. Every organization comes…and goes. Everyone prospers and grows when it uses its energy effectively. Then, when its energy is wasted, dispersed and exhausted, it declines. There is no record of an upside without a downside.

Civilizations based on conquest inevitably decline when they meet their match…or just run out of energy. Civilizations that expend their energy building huge monuments have little energy left to defend themselves against invaders or other challenges. But perhaps most often, civilizations die like humans, from the inside out. They develop power structures, aka government, with almost exclusive monopolies on the use of violence. Then, elite groups get control of the government and use it to shift more resources and energy to themselves. The rich get richer. That is why government is fundamentally a reactionary institution; it is almost always used to protect existing interests. Future interests don’t vote…children don’t stab you in the back…and tomorrow’s industries don’t make campaign contributions. In effect, government moves energy from the future to the past…from what will be to what used to be…and finally, to what will be no more.

You can casually pick up almost any newspaper to see that this is so. In the November, 16, 2012 edition of The Wall Street Journal, for example, was a story with this headline:

Export US Gas, Yes or No?

The headline would be a puzzle to an American reader a century ago. He would say to himself that it was none of his business. It was up to the gas companies to decide what they would do with their product.

But now it is a matter for the Department of Energy, which is being lobbied by Dow Chemical, among others, to prevent the gas companies from selling their output on the open market.

Why would Dow take an interest in this? Because “Dow burns a lot of natural gas in its plants,” the article explains. Dow wants cheap gas, in other words. “The national interest is best served in keeping gas in an abundant and competitively priced position,” argued an executive.

Cheap gas may or may not be in the national interest. But Dow knows where its interests lie. And the politicians can look to see where theirs lie too. Who made more campaign contributions? Dow and other big gas users? Or the gas producers? The squeakiest wheel gets the grease. But the wheels of the future are silent.

Joseph Tainter, in his Collapse of Complex Societies, believes the decline in civilizations can be traced to problem solving. Each challenge, he says, leads to a solution, which involves greater complexity. Bureaucracies, hierarchies, rules, and regulations are imposed. These things cost time, energy and resources. Eventually, the cost is too great and the downside is reached.

In the Roman Empire, for example, agricultural output per person dropped as population increased. The problem was addressed by a policy of conquest.

The Romans took resources — grain, slaves, gold — from their neighbors. But this required a large army, which was an expensive, energy-consuming enterprise. The return on investment declined…and eventually went negative. The Empire collapsed. That was not necessarily a bad thing. When the decline on energy investments is negative, you are better off stopping the program. And archeological evidence from bones and teeth suggest that many people were actually better fed after the collapse of the empire.

As the size and complexity of society grows, the governments that are most competitive are those that draw on the most support (energy) of their subject peoples. That is why the Roman policy of conquest was so successful. They were able to turn the conquered peoples into supporters of the regime, with most of the army eventually comprised of non-Roman soldiers. The British Empire was good at this too. The empire began by subduing the Scots, who became the backbone of the British Army. Today’s American army, too, depends heavily on soldiers from the southern states, who were conquered by Abraham Lincoln’s armies in the 1860s.

The energy available to a society depends on many things, probably the least important of which is beneath the ground. More important is the organizational system and its stage of development. In an early stage, the system tends to be robust and efficient — or ‘simple,’ in Tainter’s terms. Later, additional complexity degrades returns on energy investments. While this complexity may be described as a form of problem solving, it is better understood as an attempt by elite groups to hold onto their wealth and power.

But to fully understand this, we need to back up and look at how government really works and how it too is subject to the Rule of the Downside. That subject, we shall undertake tomorrow…