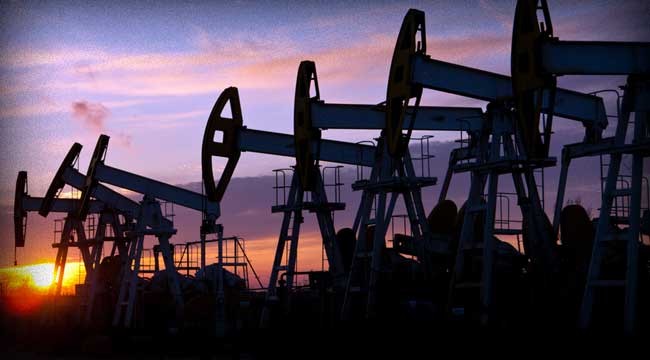 Down Spacing: The Next Chapter in the U.S. Oil Boom

We’re in the midst of a “second revolution in South Texas” Hart Energy’s Richard Mason says.

The first revolution, started back in the early 1830s when Texas encountered an onslaught from the Mexican army. From San Antonio, west to Gonzales, and from Gonzales south to Goliad battles raged as the fight for independence continued.

We’ll all remember the Alamo, the eventual repeal of the Mexican army and America’s gained ground as a world power.

…And today we’re urged to remember a second revolution in South Texas. Below the same prairieland that Texans fought for their freedom, sits one of America’s greatest shale bounties, the Eagle Ford.

I’m hunkered down in San Antonio as I type, but I wanted to rush you this update from the front lines.

Think of it like a stack of pancakes, between each pancake is a layer of syrup. At first, oil producers thought they would only have the top layer of syrup, now they’re looking underneath the first pancake and seeing more syrup.

In short, there’s a new “technology” sweeping America’s shale formations — and it’s about to make some investors a lot of money.

It’s called “down spacing” and it’s the next game changing technology in American energy.

Down spacing is the idea of decreasing the space between wells. Instead of having one well on an 80 acre section, through down spacing there would be, say, two wells in that same plot.

I call this a technology because the idea is much more complex than it seems (but as you’ll see the outcome is highly profitable.)

You see, America’s shale production is still wet behind the ears. Although the needle is moving in the right direction (we’re producing more oil than we have in the past 30 years), there’s still a lot to be learned in the field.

Along those lines, the industry first learned about horizontal drilling and hydraulic fracturing (or fracking.) Combined, these two technologies unlocked the shale deposits that are producing today.

Along with that we’re seeing much more detailed models of the underground geology. Instead of guessing as to what’s under the earth geophysics and 3D-seismic imaging are creating underground treasure maps.

Horizontal drilling, fracking, 3D seismic…. That’s where it all started.

Today we’re at the next stage of the game. Along with cost savings and other efficiencies like pad drilling (where multiple wells are drilled from the same pad) the industry is quickly developing technology around down spacing.

Indeed, it’s not just as simple as putting two wells on the plot where you’d normally put one. Instead engineers are developing drill plans, reviewing production rates and studying alternative ideas to see if these closer wells are economic in the long-run.

At the most recent installment of Hart Energy’s Developing Unconventionals Conference in San Antonio, it’s clear that MANY of America’s premier shale producers are embracing the benefits of down spacing. Frankly I’m awestruck by how many folks are talking about this previously-obscure topic. But they were.

In short, the results have shown that decreasing well spacing from 80, to 60 or even to 40 acre plots is not affecting the overall economics of a well.

For companies in these shale plays that means double the oil production per acre. Best of all, I don’t think this idea has filtered its way into share prices yet!

You see, up until now I haven’t heard too much about down spacing. Instead operators were busy talking about new plays, wildcat drill results and more. But now they’re looking at their acreage packages and realizing that they’re sitting on even more oil production than they previously thought.

What’s funny, if you read these pages often you may even confuse this idea with what’ we’ve talked about as layered or “stacked” plays.

A stacked play is where a shale producer can access more shale oil above or below the initial production zone. So instead of thinking they have one shale formation to produce from a drill pad, it turns out they may have multiples of that!

Think of it like a stack of pancakes, between each pancake is a layer of syrup. At first, oil producers thought they would only have the top layer of syrup, now they’re looking underneath the first pancake and seeing more syrup. In some places they’re finding as much as 12 times the amount of production they expected. That’s a big stack of hot cakes!

Or think of it this way…

According to Doug Brooks, CEO of Aurora Oil & Gas (a good-looking producer in the area) “these fields are just going to get better.” Then, he posits “instead of 8-10% recovery, what if we could go up another 4%?”

So you see, there’s still plenty more oil in the ground — as the technology continues to “get at it” that percentage of oil recovery will keep heading higher. That means a lot more cha-ching for producers.

Add it all up and we’re looking at the next reason to be excited about American shale plays. Indeed, as this South Texas revolution continues, remember the Eagle Ford.

P.S. As I mentioned, I’m in San Antonio right now, trying to get a first-hand look at some of these incredible new opportunities in shale production. I travel extensively to find plays all over the world, and subscribers to my Daily Resource Hunter newsletter are the first ones to hear about them. And as such, they get the first crack at a chance at the profits that can result. If you’re not yet receiving the Daily Resource Hunter what are you waiting for? Signing up is completely free, and it takes about 30 seconds. Don’t wait. Sign up for free, right here, and get the most up-to-date, boots-on-ground information you’re likely to find.