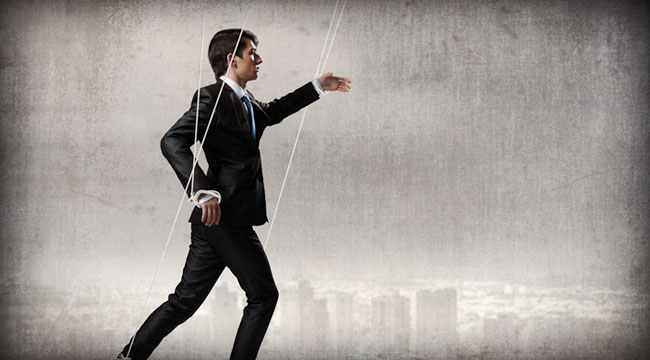 We put in a good-citizen call to the SEC the other day.

“There’s a massive scheme to manipulate stock prices,” we told the friendly agent.

“I have to tell you that your call is being monitored so that we can better serve the public,” he replied.

“Oh, don’t worry about that. The NSA is tapping our call anyway.”

“Are you talking about a specific stock?”

“You mean a Madoff-style scandal?”

“No… no… This is much, much bigger than the Madoff scandal. We’re talking major manipulation. Intentional. Knowledge aforethought. Pumping up all stock prices. Trillions of dollars.”

“Who is doing this?” the agent asked… a certain tone creeping into his voice. He was starting to suspect he had a lunatic on the line.

Look at a stock chart… and you will see that the Fed’s QE = U.S. stock market gains.

“You gotta go after those bastards.”

“OK, thanks. I just thought you should know.”

Wall Street shook the sleep from its head and rubbed its eyes last week. Investors shrugged off the bad news from Japan and Europe.

As for the bad news from the U.S. itself… it hardly mattered. Yes, the economy was weaker than had been thought — with the worst jobs report in two years. No, there was not much good news coming from corporate earnings, either.

But hey — asset values no longer depend on the performance of the Main Street economy. This is a manipulated market. The Dow rose more than 100 points, reversing a worrying trend.

Since the start of the year, U.S. stocks have been selling off. But last Tuesday, investors found their footings… and recovered their delusions…

Yes! The only thing that matters is that the Fed is on the case. Stocks are being manipulated to the upside. Willfully. Knowingly. Intentionally.

Janet Yellen can talk about tapering quantitative easing (QE). But she can’t do it. The economy needs more support from the Fed. But the Fed doesn’t put more money into ordinary household budgets. You can see that just by looking at jobs, wages, or consumer prices. The U.S. CPI is barely going up at all.

That’s because the Fed’s intervention stays in the financial economy — where the EZ money and credit as a result of ZIRP and QE feeds directly into stock, bond and real estate markets.

Look at a stock chart… identify the episodes of QE… and you will see that the Fed’s QE = U.S. stock market gains. Liquidity mainly drives asset prices, not the real economy.

Asset prices do not reflect the genuine “facts on the ground” for businesses or consumers. They are jimmied and jived by the authorities.

Last week, we noted that stocks, bonds and real estate have added $21 trillion to the nation’s balance sheets since 2009. But at the rate the economy is adding real wealth, it will take 70 years to catch up with those asset prices. Stocks, bonds, and real estate are all counting on growth that will never happen. Or at least it won’t happen soon enough to justify such high prices.

What made stocks go up so much last year was that the Fed made a lot of liquidity available — while the federal government used less of it than it had the year before. This left a lot of excess liquidity wandering around looking for a home.

What did it find? Stocks and housing!

Most likely, this will continue. Stick with me now…

On the evidence… they’re right!

Without Fed support, the economy would probably be in recession. U.S. GDP went up about $350 billion last year. The Fed offset it with $1.2 trillion worth of QE. Even so, the economy only limps along. Without it, the economy slumps. The Fed can’t tolerate a slump. So, it has to continue with QE.

Meanwhile, the federal government is absorbing $400 billion less capital this year than last as a result of lower budget deficits. This leaves a lot of excess stray kittens in need of adoption. Who will take them in?

This is blatant manipulation of the markets. The Fed is open about it. Even proud of it.

C’mon, SEC, you put the petty, two-bit manipulators in jail. A few million here and there. BFD! How about the big boys? How about a trillion-dollar conspiracy to raise stock prices?

Arrest Janet Yellen! We want to see her do the perp walk.

Ed. Note: So if the Fed is manipulating the market to keep the politicians on Capitol Hill happy, where does that leave you as a saver? Not anyplace you’d choose to be. It’s clear you can’t depend on your elected officials to protect the value of your money. That’s akin to allowing the fox to guard the hen house. Whether through inflation or taxes, they’ll take what they want. So what is a self-reliant person to do? Find a loophole, of course. And readers of today’s Laissez Faire Today email edition were given a chance to discover a BIG one for themselves. One that could deliver them dozens of tax-free income checks every year. If you didn’t get today’s Laissez Faire Today, not to worry… You can sign up for FREE, right here, to ensure you never miss another great opportunity like this. So don’t wait. You’re next issues is always just a few hours away. Sign up for FREE, right here.

Volatility and the Secret of “Hot Money”