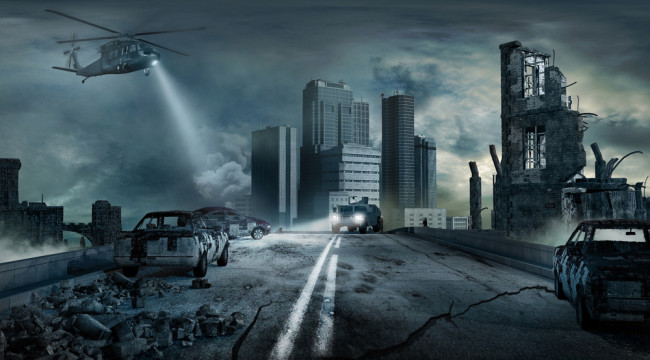 The End of the World Has Already Begun

FRANKFURT, Germany – Nothing much to report from the stock market yesterday. Investors are regaining their calm.

A few weeks ago, it looked as though the end of the world had begun.

We are talking, of course, about the world in which credit, stocks, and central bank reputations only go up.

But after a big fright in August, investors recovered their relaxed madness. They concluded that there was nothing to worry about.

They may be right. You never know. But our guess is that the end of the world has already begun… and they just can’t face it.

Since the end of World War II, credit has been expanding in the U.S.

At first, it was a healthy expansion. Young, middle-class families took out mortgages and ran up bills on “charge cards,” such as Diners Club and American Express.

Then, in the late 1950s, came the first credit cards. This was accompanied by large increases in consumer credit.

Until the 1970s, all was well, because wages were rising, too. And with so much new technology coming online, people believed their wages could only increase.

Debt was no problem – neither for the nation nor for households. We would “grow our way out of it.”

But a strange – and as yet not fully understood – new trend began in the 1970s. After accounting for inflation, incomes for most Americans dramatically tapered off.

The economy was slowing, too, after taking the effects of inflation into account.

At first, this was thought to be temporary – a fluke, perhaps caused by the 1973 oil crisis. But the trend toward lower economic growth continued. Decade after decade, the trend in GDP growth was down. In most parts of the U.S., GDP per person peaked in the 1970s or 1980s.

Remarkably, the average American working man earns less today than he did a half century ago (again, accounting for changes in consumer price inflation).

That is not the same as saying that a person with a good job earns less today than he did in the 1960s. According to Census Bureau figures, the average inflation-adjusted wage for Americans in the top 5% of earners is up by more than 75% since 1967. Women earn a lot more, too.

But good jobs have become scarce. The labor participation rates – the number of people who have jobs or are looking for jobs as a percentage of the people who are of working age – is at its lowest level since 1977. 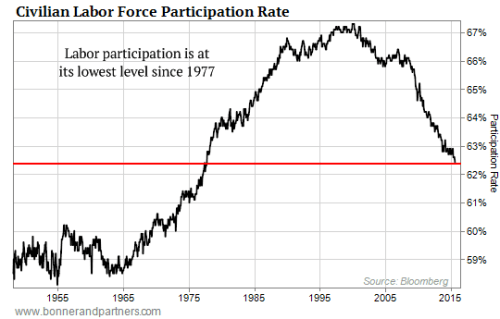 But although economic growth and most people’s incomes slipped, debt (the flip side of credit) kept growing.

This was Stage II – the unhealthy phase of the credit expansion. No longer backed by broad-based wage increases, debt was expanding beyond the capacity of the economy – and borrowers – to repay it.

Now we were asking for trouble.

You may be wondering how this was possible. Why would lenders extend credit to people who couldn’t pay back?

The answer: The fix was in.

In 1971, President Nixon dramatically transformed the global monetary system. Under the previous Bretton Woods system, the dollar was backed by gold. And the major global currencies traded at fixed rates to the dollar… and by extension to gold.

This meant a nation couldn’t get too far into debt… especially when it came to its trading partners.

Trade surplus nations – which amassed dollars in return for net exports to the U.S. – could ask to redeem their dollars in gold. This caused gold to leave the overspending nation and flow to the creditor nation.

That’s how the U.S. got so much gold in the first place. France and Britain spent more than they could afford on World War I. The U.S. sold them food, weapons, and fuel… and demanded gold in repayment.

The U.S. started spending money on both “guns and butter” – a Great Society at home and a war in Vietnam.

Much of the spending to fund the war in Vietnam ended up as dollars in the hands of Vietnamese branches of French banks. And when, in 1965, president Charles de Gaulle sent the French navy across the Atlantic to pick up $150 million worth of gold in exchange for dollars, it was greeted like a long-lost relative at the reading of the will.

Finally, with gold being airlifted from Fort Knox to meet foreign demands for payment, rather than honor Washington’s promise to convert dollars to gold, Nixon panicked and defaulted.

Henceforth, anyone holding dollars was on his own…

It all would have gone bad very fast. By April 1980, the annual rate of consumer price inflation was running at almost 15%.

Gold soared as high as $800 an ounce. It looked as though Nixon’s new fiat money system would go off the rails soon – as all previous experiments with paper money had.

Instead, in 1979, President Carter appointed Paul Volcker as Fed chairman. Volcker stepped in front of the runaway train and commanded it to halt. And it did…

We remember the howls of discontent. Volcker was “stifling the economy,” said the politicians. He was “killing jobs,” said the newspapers. He was causing “the worst downturn since the Great Depression,” said the economists.

But Volcker didn’t budge. And when Ronald Reagan entered the White House in 1981, he backed Volcker.

Volcker announced his intention to squeeze inflation out of the system soon after he became Fed chairman.

Bonds – which do well when inflation is low – should have rallied. Investors should have raced to lock in roughly 10% yield available on the 10-year Treasury note.

Then, as now, people were not aware – or were not willing to believe – that a major change had occurred. It wasn’t until 1982 that the bond market turned; finally, investors realized that it was a new world.

Volcker saved the system. Bond yields – and interest rates – have been coming down ever since.

Too bad he didn’t save a better system.

Not many men can resist the appeal of free money. Americans proved they were no better at it than others.

Falling interest rates and the paper dollar gave them a way to impoverish themselves – by spending money they hadn’t earned.

They took the opportunity offered to them. They borrowed and spent… and drove the entire world forward at a furious pace.

But now that stage is over.