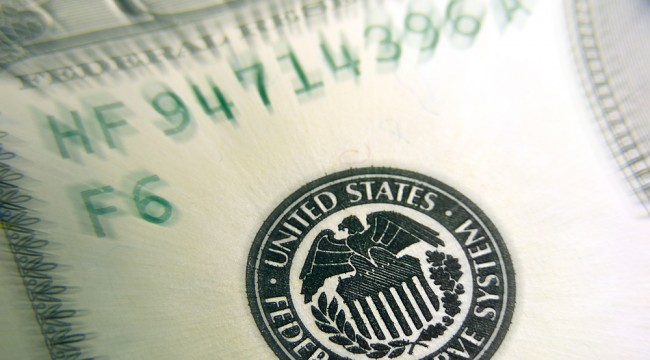 The Coming Epic Collapse Of The Bond Bubble

Put another way, the growth of the last three decades, but especially of the last 5-10 years, has been driven by a greater and greater amount of debt. This is why the Fed has been so concerned about interest rates.

You can see this in the chart below. It shows the total credit market outstanding divided by GDP. As you can see starting in the early ‘80s, the amount of debt (credit) in the system has soared. We’ve only experienced one brief period of deleveraging, which came during the 2007-2009 era. 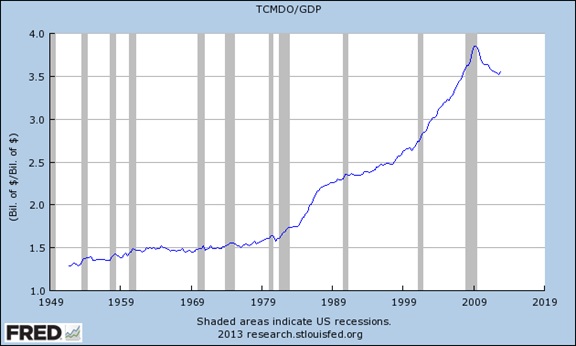 Bernanke couldn’t stomach this kind of deleveraging. The reason is simple: those who have accumulated great wealth as a result of this system are highly incentivized to keep it going.

Bernanke doesn’t talk to you or me about these things. He calls Goldman Sachs or JP Morgan. And most of the Wall Street wealth of the last 30 years has been the result of leverage (credit growth). Take away credit and easy monetary policy and a lot of very “wealthy” people suddenly are not so wealthy.

Let me put this in terms of real job growth (created by startups) vs the “job growth” of the last five years.

According to the National Bureau of Economic Research, startups account for nearly all of the US’s net job creation (total job gains minus total job losses). And smaller startups have a very different perspective of debt than larger more established firms.

The reason is quite simple. When a small business owner takes out a loan he or she is usually posting personal assets as collateral (a home, car or some other item). As a result, the debt burden comes with the very real possibility of losing something of great value. And so debt is less likely to be incurred.

This stands in sharp contrast to a larger firm, which can post collateral owned by the business itself (not the owners’ personal assets) and so feels less threatened by leveraging up. Thus, in this manner, QE and other loose monetary policies maintained by the Fed favor those larger firms rather than the real drivers of job creation: smaller firms and startups.

This is why job growth remains anemic while the stock market has rallied to new all-time highs. This is why large investors like Bill Gross have applauded the Fed’s policies at first (when the deleveraging was about to wipe him out in 2008), but then turned against them in the last few years as a political move. This is why QE is so dangerous, because it increases concentration of wealth and eviscerates the middle class.

Guys like Warren Buffett or Larry Ellison of Oracle can take advantage of low interest rates to leverage up, acquiring more assets (that can produce income) by posting their current assets as collateral (Ellison commonly “lends” shares in Oracle to banks in exchange for bank loans).

Cheap debt is useful to them because the marginal risk of taking it on is small relative to that of a normal individual investor who would have to post a needed asset (his or her home) as collateral on a loan to leverage up.

This system works as long as debt continues to stay cheap. However, in the last 12 months the Fed has definitively crossed the point of no return with its policies. It is not just a matter of timing before this debt bubble bursts.

Note: This originally appeared on Gold-Eagle.com

P.S. Readers of The Daily Reckoning email edition were alerted to the Dot-com bubble, the housing bubble and the rise in gold prices before each of these events occurred, and read our best tips on protecting their wealth. Don’t be one of those caught off guard when the next big bubble bursts. Subscribe today by clicking here.

Graham Summers is Chief Market Strategist for Phoenix Capital Research, an independent financial research firm based in Charlottesville VA with clients in 56 countries around the world. His insights have been featured in Rolling Stone Magazine, Crain’s New York Business, Thomson-Reuters, The Huffington Post, CNN Money, FOX business, and the National Business Review. Visit his website at http://gainspainscapital.com.