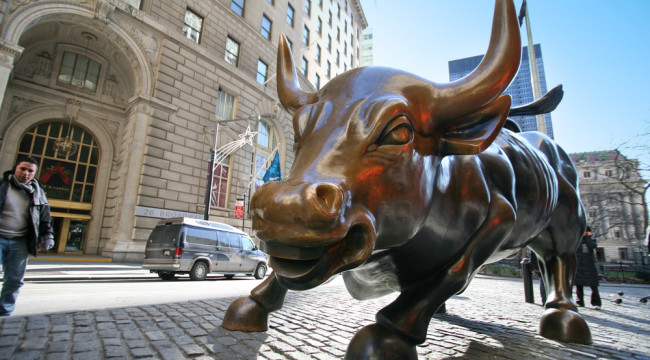 The Bull Market in Stocks May Already Have Ended

GUALFIN, Argentina – As expected, Wall Street’s shills were out in force yesterday.

And the Dow rebounded from Tuesday’s rout – up 293 points.

CNBC assured investors that the “U.S. is a place you should be investing.”

And Bloomberg explained that, “based on history,” investors could expect to wait no more than four months until the stock market fully recovers.

The S&P 500 rally that began in March 2009 has been marked by two previous corrections: a 16% selloff from April to July in 2010, and a 19% slump over seven months a year later. The benchmark recovered within about four months of each.

So if history is any guide, the market may not be back at its May peak until late December.

But wait… This assumes we’re still in a bull market.

As we’ve seen, two factors have been paramount in driving the bull market of the last six years: the Fed’s zero-interest-rate policy (ZIRP) and its QE programs.

And neither of those things is working for the U.S. now.

The Fed’s QE is on pause. As for ZIRP, it seems to have lost some of its zest.

It’s no wonder… As we’ve pointed out many times, lending money that didn’t exist before to people who are already deeply in debt is not a good business model. It doesn’t stimulate an economy. And it doesn’t make people better off.

All it does is keep the can bouncing down the road.

And with the Fed now running out of ammo, we MAY no longer be in a bull market. Instead, we MAY be entering a bear market.

If so, you can forget about a recovery in four months. Instead, it may take four years… or 40 years… to reclaim the bull market high set this past May.

Remember, from the bull market high set in 1929, it took until 1954 before the U.S. stock market fully recovered. A quarter of a century, and one world war, later.

And in Japan, the Nikkei is still roughly 50% below its bull market high set in 1989.

Corrections in a bull market are one thing. Bear markets are something very different.

Not earnings. Not growth. Not productivity. Not savings. Not investments.

According to Duncan, a basic “liquidity gauge” for the U.S. is relatively easy to construct. When Washington borrows dollars to fund its budget deficit, it absorbs liquidity. When the Fed creates dollars through QE, it injects liquidity into the financial markets.

In the past, the Fed’s central bankers were practically wearing out the pump handles to get more liquidity into the system.

During 2013, for example, Washington absorbed $680 billion to fund its budget deficit. And the Fed injected just over $1 trillion through QE. The difference created $320 billion of excess liquidity.

But now Duncan warns that his liquidity gauge for the U.S. is set to turn negative in 2015. Washington will absorb more liquidity than the Fed is set to inject.

And he is forecasting a negative reading every year from 2015 to 2020.

As Duncan recently told readers of his Macro Watch advisory, Fed stimulus is “no longer sufficient” to keep the credit bubble inflated.

As a result, he warns, the global credit bubble is deflating, and the world is “sliding back into a severe recession.”

The can is no longer rolling along. Instead, it has come to a near halt, with central bankers and government policymakers desperate to give it another boot.