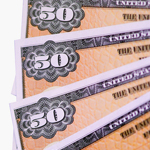 He has what seems like the easiest job in the world. He manages $4 billion of assets on which he earns fees. And all he does is buy US Treasuries.

His name is Van Hoisington. No man has been more right about interest rates in the last two decades. Van thought they would go down — and has thought so since 1990. So they have. As they fell, the value of Van’s bonds rose. Since he’s been right, his track record is ridiculously good. He has posted a 9.1% annualized return over the last ten years…in a bond fund!

You know those old Michael Jordan ads with the song “I Wanna Be Like Mike”? Forget it. I wanna be like Van.

So what does Van Hoisington think now? Will interest rates finally turn upward? They can’t possibly go lower, can they?

“Rates aren’t going up anytime soon,” he said, giving away his conclusion early. But the reason why is what makes the drink. Let’s look at why Hoisington thinks the way he does.

By way of introduction, let me say that Hoisington (born in 1940) is the top man at the eponymous money management firm, which he founded in 1980. He is, like me, an ex-banker. The firm operates out of Austin, and Van has a bit of a Texas drawl. With his twang, mane of silver hair, big gold ring, brass-buttoned blazer and folksy manner, he reminded me of an old college football coach at an alumni fundraiser.

Can Van be right again? I have seen him make this same essential presentation at least three times before over the past five years. Each time, I walk out shaking my head, thinking he can’t be right — much to my detriment.

His case is consistent and simple. “This is not a normal cycle,” Hoisington said. “The US is bogged down in debt. It takes a long time to correct.” He pointed to numerous studies that show debt overhangs translate into soggy interest rates and flaccid economic growth.

Moreover, such debt overhangs last an average of 23 years across the 26 episodes studied. Large governments, funded by massive indebtedness, usually crush economic vitality, such that the bond markets exhale interest rates that would barely fog a mirror.

Hoisington shared a good chart — “Historic Panic Years” — which showed three debt panics besides our own 2008 panic. He chose these particular debt panics because debt levels reached (or exceeded) what we have now. As you know, we live today with the aftermath of the housing bubble. As Hoisington wrote in his second-quarter letter:

Part of the problem was two federally sponsored housing agencies that openly encouraged massive extension of housing-related debt, just as governmental institutions played a central role in the creation of excessive railroad debt in the 1860s and 1870s. The debt disequilibrium panic years of 1873, 1929, 1989 and 2008 are uniquely important because each of these events resulted from extreme over-indebtedness, as opposed to lack of liquidity or some other narrower precipitating factors. [Italics added]

Look at the “US 2008” line in the chart. And look at how many years we have to live with low interest rates — if we should follow the historical pattern of prior debt panics.

The actual starting and ending points for interest rates are also instructive. Take a look at this table:

Again, by these lights, we have years of piddly interest rates to look forward to. What about all that money printing? Like pumping blood into a corpse. Hoisington says it isn’t going anywhere. It sits, cowered by debt. No circulation, no rise in interest rates. And bonds — yes, Treasury bonds — still offer value. As Hoisington sums up, if high debt levels limit growth, then “a prolonged state of debt-induced coma may so limit the returns on other riskier assets that a 30-year Treasury bond with a 2% yield would be a highly desirable asset to hold.”

I realize this is a controversial point of view. In part, this is why I think it is important enough to write about. I don’t totally agree with him, but he has been right for so long; you should know about his work.

If he is right again, there is good and bad news. The good news is that low interest rates could prop up stocks generally, because returns will be hard to dig up elsewhere. The bad news is that we’ll all make squat on our savings. All the retired people trying to live on accumulated savings suffer. Besides this, history suggests such debt-laden economies shrink over time in real terms (or adjusted for inflation). We may be seeing this already, as household incomes are now the lowest they’ve been since 1995. We’re marching backward and it could continue.

As for me, I have been wrong for a long time in thinking that interest rates would go up. They haven’t. For once, though, I wasn’t shaking my head incredulously after a Hoisington presentation. This time, I fear he may be right — again.