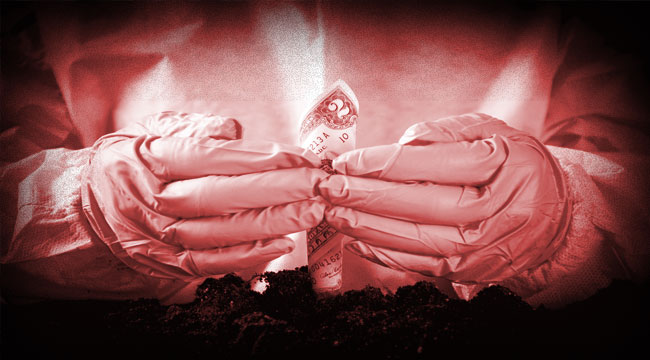 Heck, the sky’s the limit!

Investors have reached a new level of bullishness. They’re borrowing again to buy stocks, confident that prices go in only one direction.

Advisers, too, seemed sure that this was not the end of a trend, but the beginning of one. Just what you’d expect at a market top.

There’s also a swift current of economic analysis telling us that the commodities boom is over… that the Fed has the situation under control… and that the bull market in gold is finished.

All of which is amazing… and often breathtaking.

Stock market investors don’t seem to know or care that the main thing propping up their investments is the same thing that will ultimately destroy them. And that the longer the situation continues, the bigger the mess will be when it finally blows up.

We’re talking, of course, about Fed, Bank of England, Bank of Japan and People’s Bank of China monetary policy. It is “experimental.” It is “bold.” It is also reckless and potentially catastrophic.

Savers get nothing for their trouble. In fact, they lose money in real (inflation-adjusted) terms. So they shift to speculating on stocks. The stock market goes higher… but it is not a market you can trust.

It is being driven by the printing of trillions of dollars, yen, pounds and renminbi. But central bank policy hasn’t been able to budge slumping economic fundamentals. And any attempted exit by central banks in the absence of a genuine economic recovery will be, in the words of hedge fund manager Paul Singer, “somewhere on the continuum between problematic and impossible.”

It is also unnatural for a central bank to print up new money and use it, indirectly, to pay for government operations. If you could do that without penalty — that is, if you could pay for real things with fake money — you would do it all day long.

Normally, central banks don’t even try. They know the penalties make it not worth the fleeting enjoyment.

Do you see any penalties, dear reader? We don’t.

But the fact that the penalties have not yet been assessed doesn’t mean they don’t exist. And the longer we go without paying them, the greater they will eventually be.

At present, the feds get only rewards.

Fourth, the lack of yields in the bond market corrals investors into stocks. This pushes stock prices higher. Rich bankers and rich campaign contributors get richer.

For the moment, nothing.

But the markets won’t stay in this “sweet spot” for long. The time will come when the Fed will have to reverse its policies or face substantially higher inflation.

But how? Instead of buying bonds, the Fed will have to sell them. But to whom?

“Warren Buffett has a piece of advice for Ben Bernanke: It’s easier to buy than it is to sell.

“Buffett, speaking on Saturday at Berkshire Hathaway’s annual meeting in Omaha, said he is worried about what will happen when the Federal Reserve tries to wind down its recent efforts to stimulate the economy. Via a program nicknamed QE, short for quantitative easing, the Fed in recent years has bought up over $2 trillion in bonds in order to lower interest rates and promote borrowing and investment.

“Some have warned that when the Fed decides to sell its trove of bonds, or even just stops adding to it, stock markets could tank. Rising interest rates could cause banks to lose billions, perhaps igniting another financial crisis. Buffett says we don’t know what will happen, but he is concerned.

“‘QE is like watching a good movie, because I don’t know how it will end,’ says Buffett. ‘Anyone who owns stocks will re-evaluate his hand when it happens, and that will happen very quickly…

“‘People make different decisions when they can borrow for practically nothing… It’s a huge experiment.’

“Charlie Munger, Buffett’s long-term chief lieutenant, who was also talking at the meeting, says he worries about more than just inflation.

“‘What has happened in macroeconomics has surprised pretty much everyone,’ says Munger. ‘Given that history, economists should be more cautious when they print money in massive amounts.’”